Hampton Antiques specialise in antique boxes and accessories, ranging from rare 18th century Tea Caddies to iconic 20th century Decanters. We are passionate about bringing antiques into the 21st century, and inspiring the next generation of antique buyers. We also offer a bespoke restoration service; all restoration is done at our Northamptonshire workshop by hand, using traditional methods passed down through generations. Appraisal and valuations are also available. Belonged to Elizabeth Lucy Cuffe, the Countess of Desart and Lady of the Bedchamber to Queen Victoria (between 1845 & 1864). Veneered in Coromandel with brass edging. The underside of the lid is lined with green velvet and embroidered with Countess coronet and monogram. Behind this is a removable gilded freestanding mirror, concealing a leather letter-case lined with silk. The interior back edge is stamped by the manufacturer, Ortner and Houle of St. James, London who were also engravers to Queen Victoria and Royal family.

Contains an assortment of fifteen shaped glass travelling containers with silver gilt lids housed in velvet. The glass has a star cut base and stunning silver gilt lids with applied solid gold Countess coronet and initials, by Tween and Purnell 1866 .

The front folds down to reveal a wonderful accoutrements pad which holds eighteen tools including scissors, needle-case, corkscrew and unusually a pair of rulers, one being mother of pearl and the other sterling silver. With the front folded down the main sections can swing out by 90-degrees. Once this is done, removing the oblong glass containers and pressing the middle of the velvet compartments will reveal hidden jewellery drawers on either side. Underneath is a hand mirror, glove stretcher and shoe horn. There is also a drawer just above the front tool pad which contains various brushes with gold coronet & monogram replicating the sterling silver gilt lids, and a letter opener. The drawer is released by pressing the engraved plate on the interior back edge.

Elizabeth was considered by many to be a lady of exceptional beauty. She is said to have caught the eye of Napoleon III when he met her at a society soiree during his residence at Leamington Spa in 1838. It is said that a fellow guest asked him if he liked the house at which the soiree was being held, to which he replied “I like it very much but..." (turning to the countess) "... the pretty Desart even more.” Elizabeth married the 3rd Earl of Desart on June 28, 1842. In 1845 the Countess was invited to become Lady of the Bedchamber to Queen Victoria in 1845, a role she enjoyed until 1864.

It is highly possible that, due to the Royal connection with Ortner & Houle, this box was commissioned by the Queen as a parting gift for Elizabeth's services or possibly as a 40th birthday present.

More information on Vanity Boxes can be found on our history page. 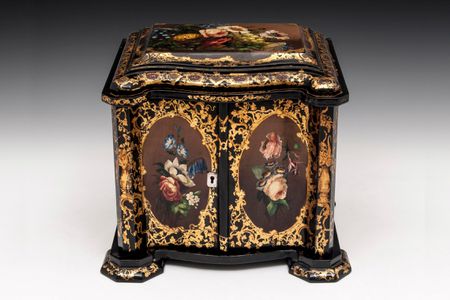 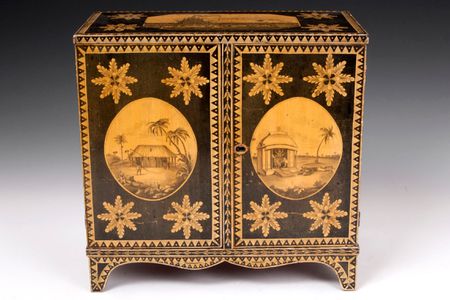 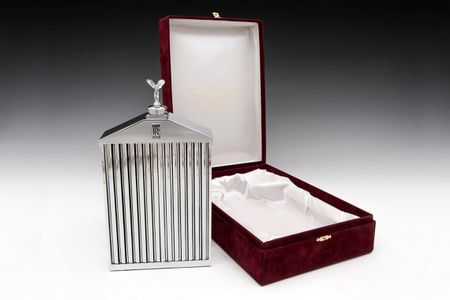