Founded in Hong Kong and with locations in London & Hong Kong, Tanya Baxter Contemporary bridges the gap between the Western and Chinese art markets. Having established long standing relationships with Chinese & international artists and collectors we exhibit some of the most exciting Contemporary Chinese artists alongside established blue chip international art. Our art advisory service operates at the top end of the market, providing specialist services and personal curation to prestigious private clients, corporations, foundations, private banks and offices. Our clients are offered investment opportunities in blue-chip art as well as discerning acquisitions in the middle market. Detail oriented and effective research as well as our connections with galleries, dealers, collectors, and museums around the world provides transparent, up to date market prices, excellent provenance, and artwork that is certified by top experts in the field. With the art market becoming a solid asset for any portfolio, the importance of confident decision making about the investment and aesthetic qualities is paramount. Such decisions require trust and our art advisory service will give you the necessary due diligence along with dependable resources and reassurance that help to build a trustworthy relationship which will lead to a formidable art collection. From inception to the final step of hanging the art we help our clients make intelligent decisions that add to the long term value of their collection. 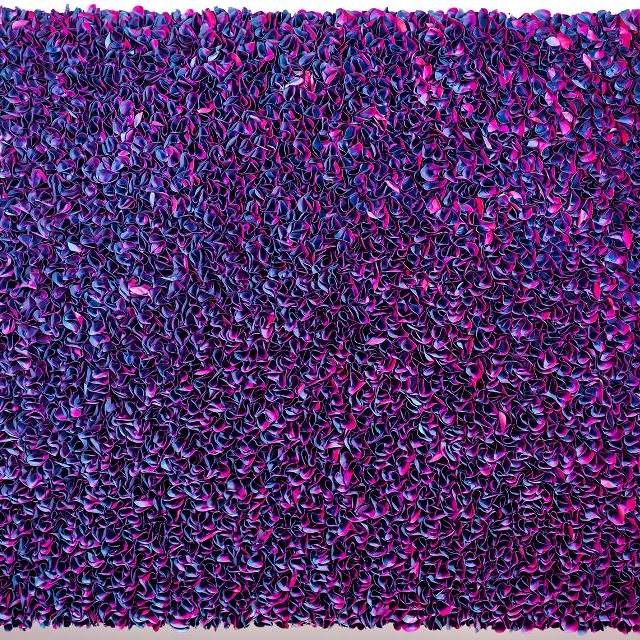 Banksy is a graffiti artist from Bristol, UK, whose artwork has appeared throughout
London and other locations around the world. Despite this he carefully manages to
keep his real name from the mainstream media. However, many newspapers assert
that his real name is Robert or Robin Banks

Banksy, despite not calling himself an artist, has been considered by some as talented
in that respect; he uses his original street art form, often in combination with a
distinctive stencilling technique, to promote alternative aspects of politics from those
promoted by the mainstream media.

Some believe that his stencilled graffiti provides a voice for those living in urban
environments that could not otherwise express themselves, and that his work is
also something which improves the aesthetic quality of urban surroundings; many
others disagree, asserting that his work is simple vandalism (a claim made by at
least Peter Gibson, spokesperson for Keep Britain Tidy), or that his (apparently left
wing) beliefs are not shared by the majority of the inhabitants of the environments
that he graffitis. This political purpose behind his vandalism is reminiscent of the Ad
Jammers or subvertising movement, who deface corporate advertising to change the
intended message and hijack the advert.

Banksy does, however, also do paid work for charities (e.g., Greenpeace) as well
as demanding up to £25,000 for canvases. It has also been alleged and denied that
Banksy has done work with corporations such as Puma. This has led to him being
accused of being a sell-out and a careerist by other artists and activists.

Due to the shroud of secrecy surrounding his real identity and his subversive
character; Banksy has achieved somewhat of a cult following from some of the
younger age group within the stencilling community.

In 2004 the Space Hijackers gave out spoof vouchers outside a Banksy exhibition
to highlight the artist's ironic use of anti-capitalist and protest imagery while doing
work for corporations and art galleries. Another of Banksy's tricks involved hanging
a piece of his own art in London's Tate Modern, and as of March 2005, the New York
Museum of Modern Art, Metropolitan Museum of Art, the Brooklyn Museum, and
the American Museum of Natural History. In May 2005 Bansky's version of primitive
cave painting depicting a human figure hunting wildlife while pushing a shopping
cart was found hanging in the British Museum.

On 4 August 2005, the BBC reported that Banksy had painted 9 images on the
Palestinian side of the Israeli West Bank barrier, including an image of a ladder up
and over the wall and an image of children digging a hole through the wall.

Banksy has also self-published several books that contain photos of his work in various countries as well as some of his canvas work and exhibitions, accompanied by his own subversive and often witty writings. His first book, published in black and white, is 'Banging Your Head Against a Brick Wall Followed by the Full Colour Existentialism'. In 2004 he published his third book, 'Cut it Out', and 2005 saw the publication by 'Random House of Wall and Piece'. 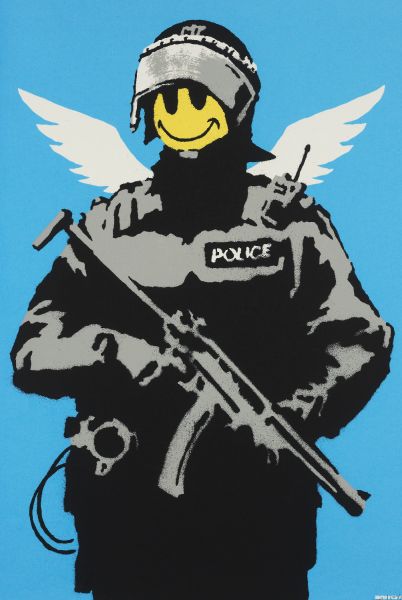 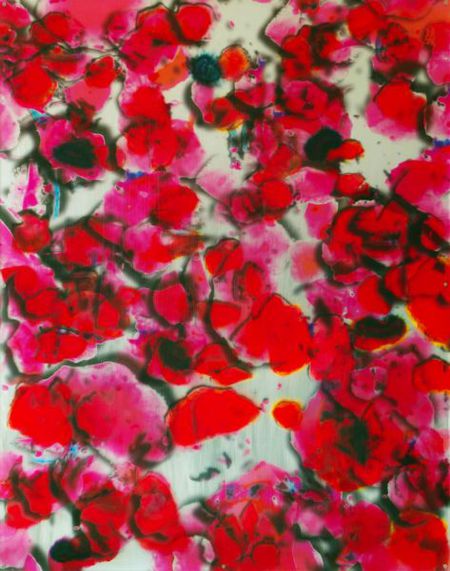 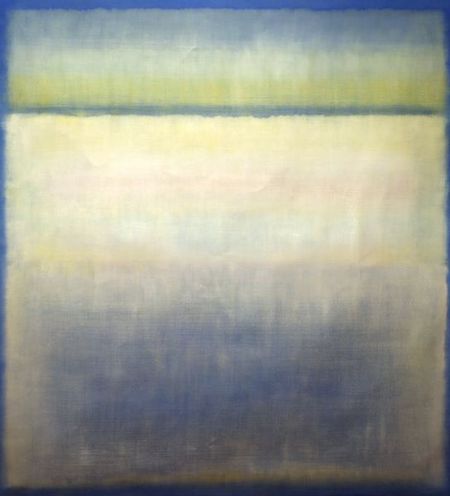 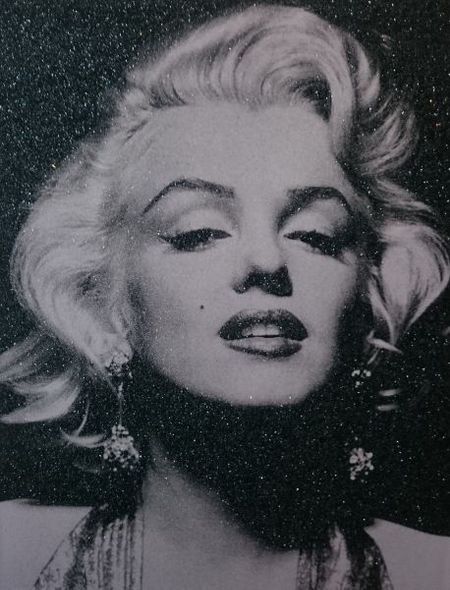 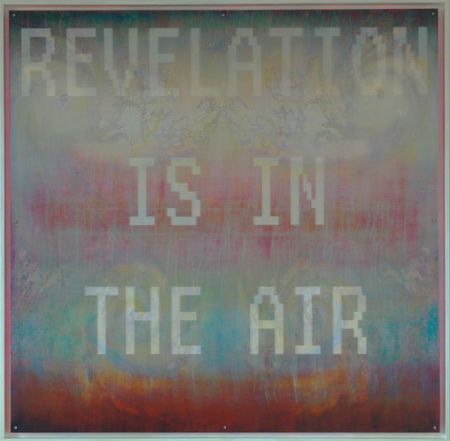 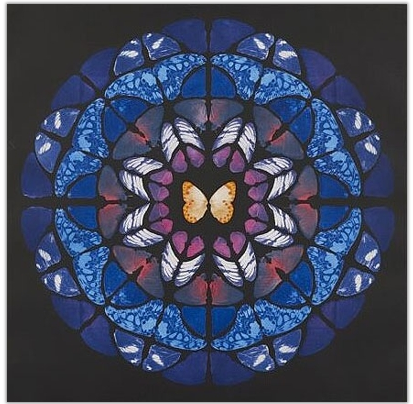 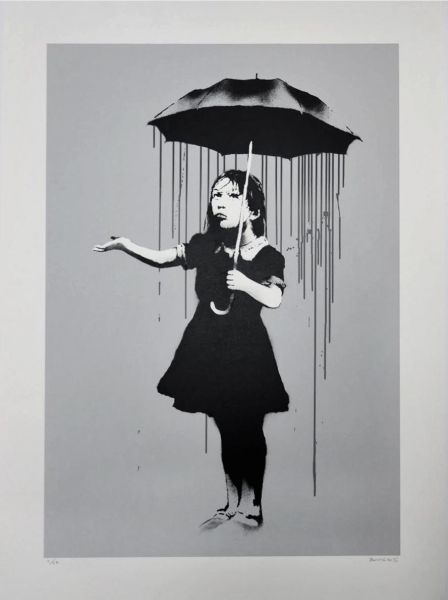