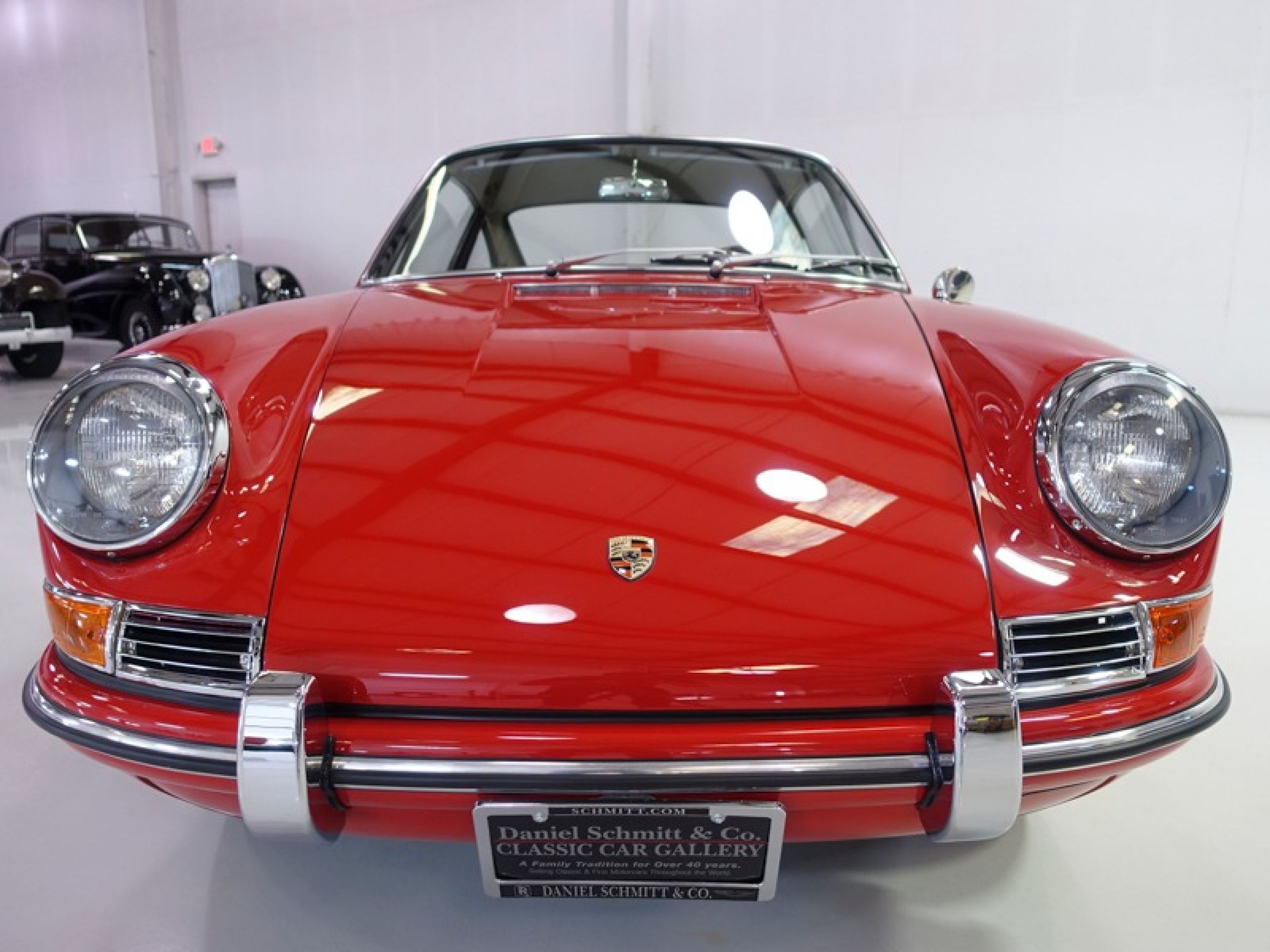 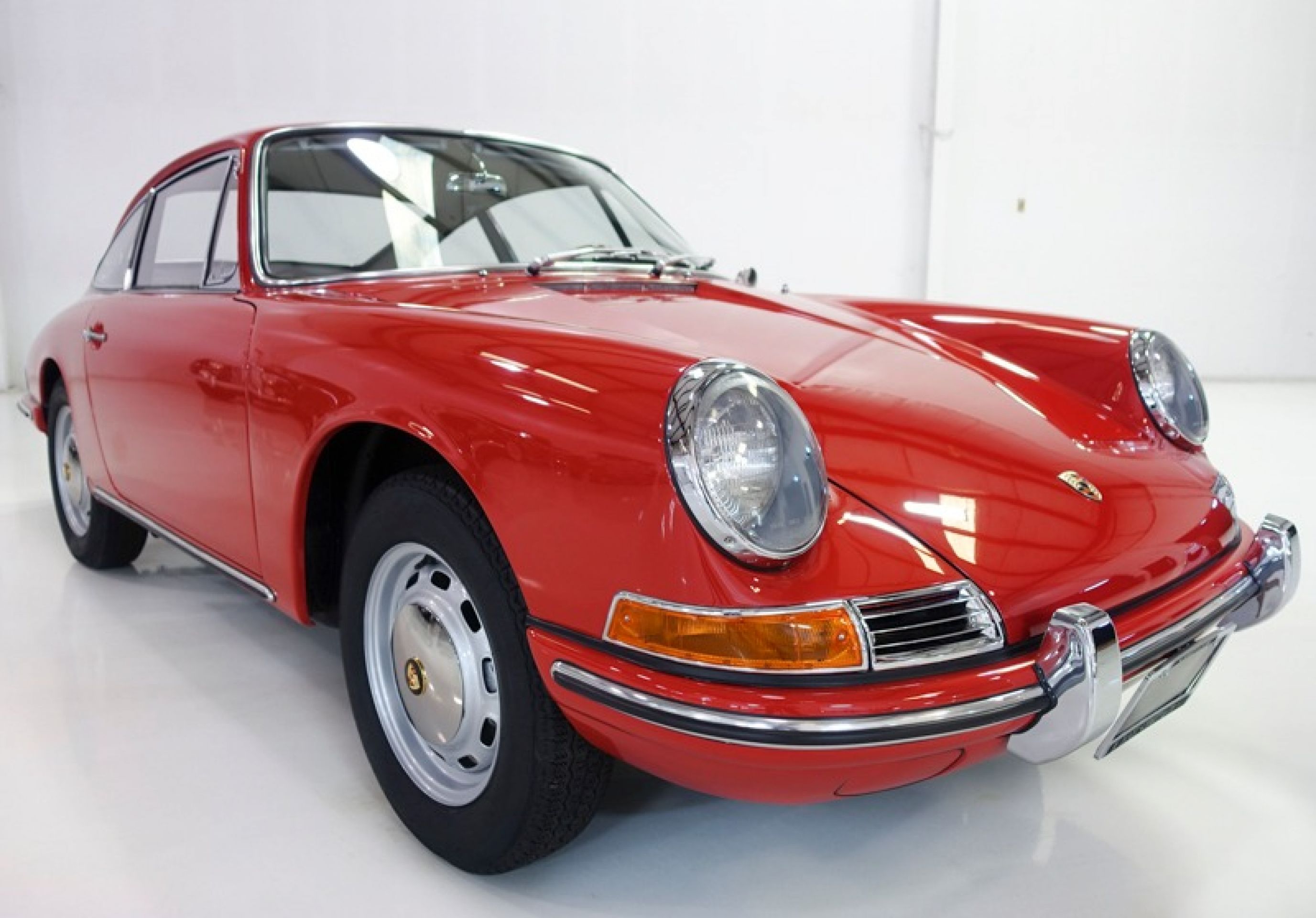 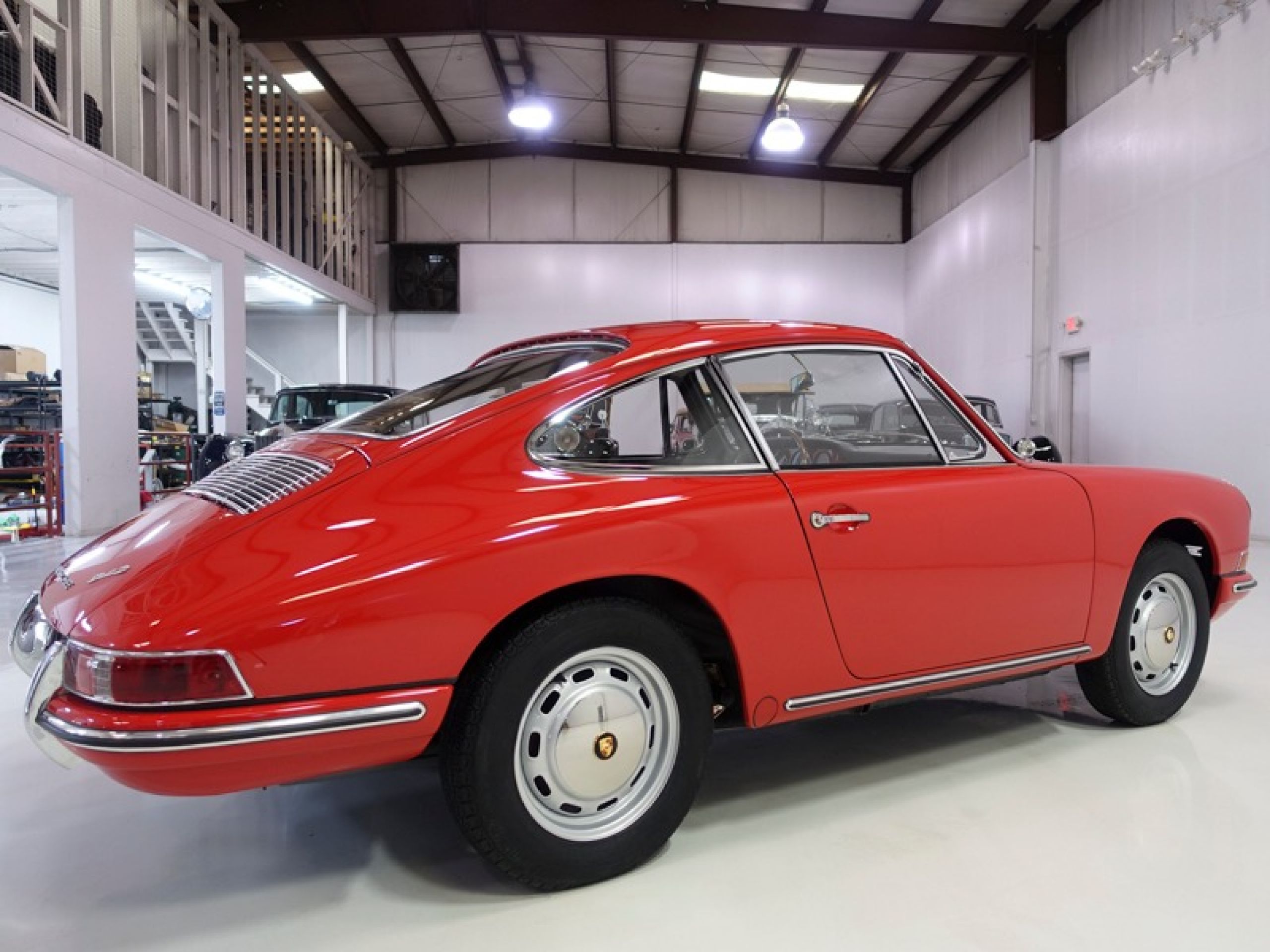 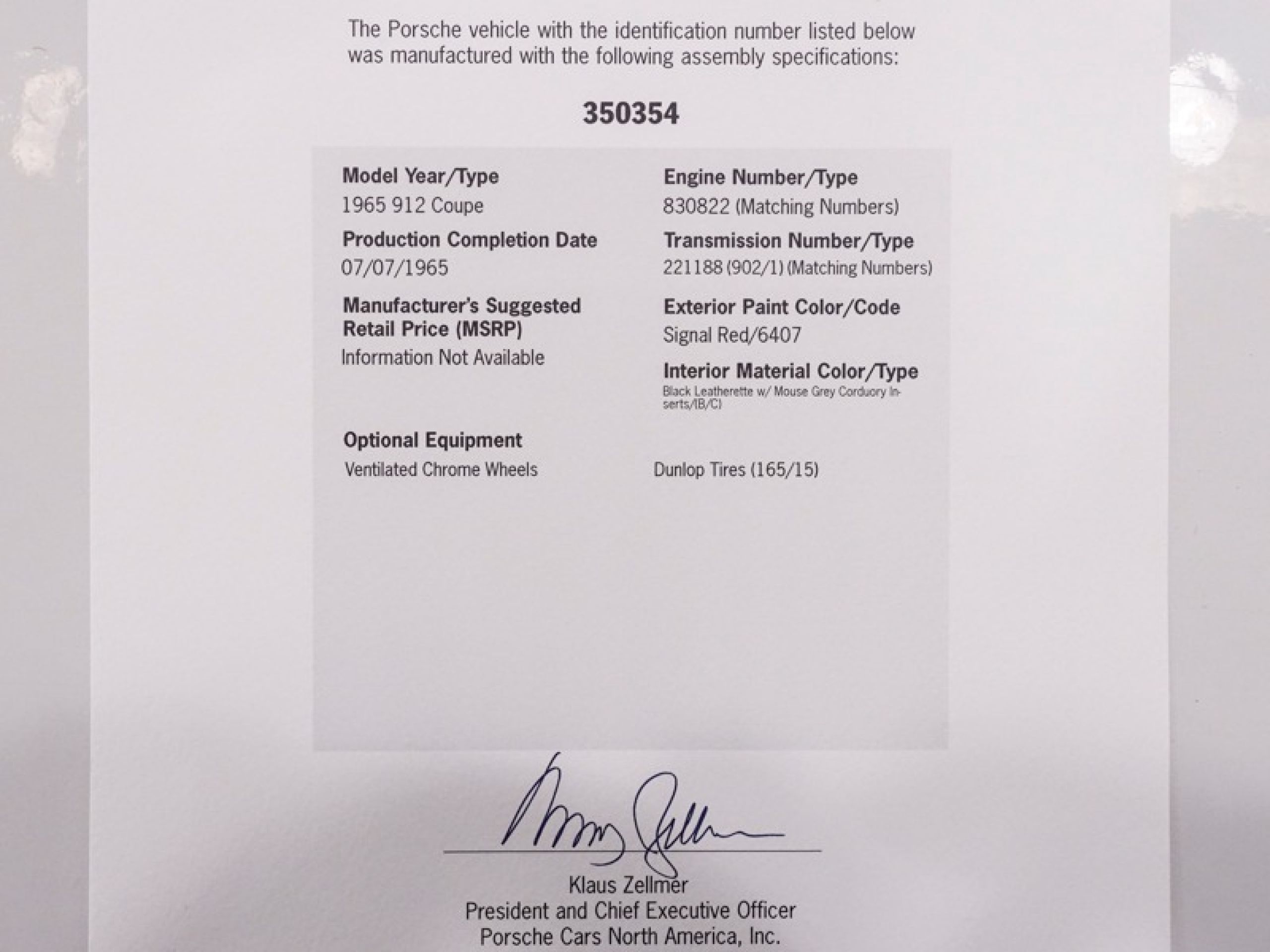 One of the best early 912's that can be found on the market today!

The premier 912 model for the Porsche collector or enthusiast

The 1965 Porsche 912 featured here is finished in factory correct Signal Red over an all new black interior. This freshly restored example is an incredibly rare and desirable 1965 (first production year) model produced in July 1965 that is still propelled by its numbers matching drivetrain as confirmed by the accompanying Porsche Certificate of Authenticity. Prior to its extensive 14 month full cosmetic restoration, this 912 was under the meticulous care of single ownership for nearly 45 years! The genuine 1965 painted dash 3-guage 912s are the most sought after 912 variants and rising market values have continued to increase their desirability. This freshly restored, well documented example is sure to bring many years of enjoyment to its future caretaker. We are proud to offer this premier investment-grade 1965 Porsche 912 to the most astute collector, investor or enthusiast who recognizes the appeal of the first production year 912 and spectacular condition. Ready to make an investment that you can actually enjoy? Classic cars have proven to be among the most resilient and rewarding investments in recent years with the Historic Automobile Group Index (HAGI) jumping 39% in 2013, 16% in 2014 and 17% in 2015 while posting gains of 467% over the last 10 years. Please contact one of our expert sales consultants at (314)291-7000 or [email protected] for more information. They will be happy to give you a complete walk-around, supply you with a more detailed description and answer any questions you may have. Trades welcome. Financing available. Buy with confidence.

HISTORY OF THE 1965 PORSCHE 912
While it has been suggested that Porsche did not originally intend the 911 as a replacement for the 356, when the 911 was first shown in 1963 made the 356 design appear rather dated. Porsche quickly surmised that they have to adapt the new 900 series design into a proper successor for the 356 which would end production in 1965. The end result was the adaptation of the 356SC 4-cylinder engine into a 911 body; thus, the Porsche 912 was created. First offered in the middle of 1965, the 912 Porsche weighed 200 pounds less due to its lighter engine. Some still argue that the 912 is a more balanced and better handling car than the early 911s. The 912 engine benefited from many years of development during 356 production, which made the 912 a very desirable model upon its release. 912 production began during April 1965 with bodies being constructed in house by Porsche and by the coachbuilders at Karmann. Due to the mid-year introduction, early 912s have several unique features including a matching body color painted dashboard with three gauges. During the 1960's Porsche would shut down the factory during the month of August to allow a month long holiday for employees. As such the true 1965 model 912's were only produced for a few months during the summer of 1965. Today, very few of these early model 3-guage 912s survive. Only 1,500 were constructed with Karmann commissioned bodies while another 699 were assembled fully in house at Porsche. 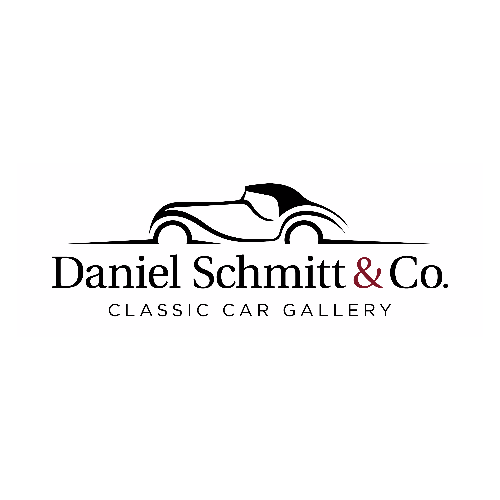 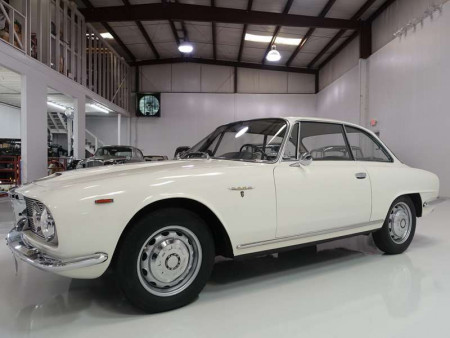 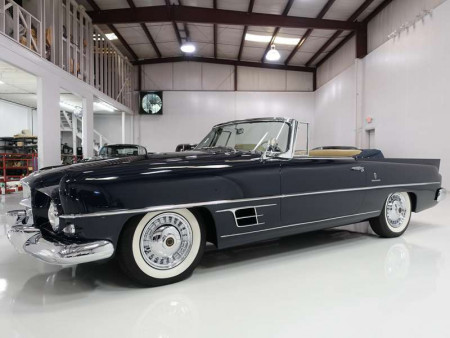 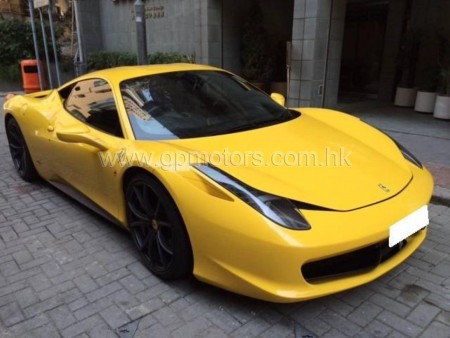 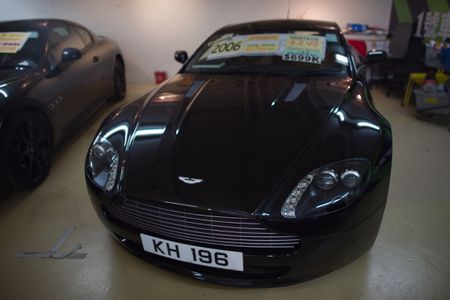 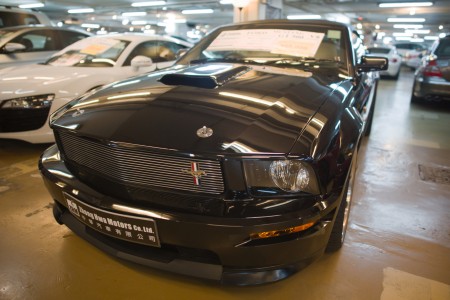 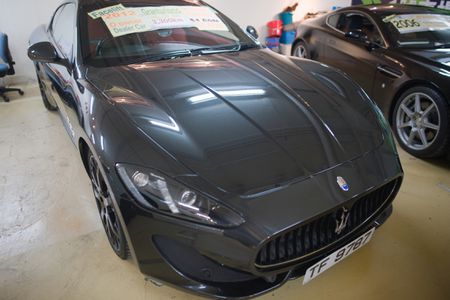