The body is applied with large double-scroll handles surmounted by tigers, the interior is richly gilded, the matching cover is also chased with scrolling foliage in relief and surmounted by a massive cast finial modelled as a horse.

The design is unique and original, as mixes elements of the cups made in the Regency period by royal silversmiths such as Paul Storr, Benjamin Smith and Robert Garrard with elements derived from the Indian culture, such as elephants, tigers and other animals, very naturalistically modelled.

The cup was made to be presented as a trophy for a horse race held in Bangalore in 1832\. One side bearing the original inscription "This Cup value 1000 Rupees was given by the Officers of the 7th Light Cavalry to be run for the BANGALORE Races in November 1832 Free for all Arab Horses weight for Age and Inches, 14 Hands and Aged_Carrying_8 Stone_10 lbs_Heats_2 Miles Won by Beating", on the other side a later presentation inscription, relating to George VI's coronation: "This Cup was run for again in Madras on December 15th 1937 To Commemorate The Coronation of King George the Sixth Won by "Old Fogey" The property of the Lady Marjorie Erskine".

The base bearing the Hallmark "GG&Co" for George Gordon & Co, one of the most important dynasty of silversmiths active in Madras since the early 19th Century (see Wilkinson 1987, p.71\. George Gordon was later under the partnership of Peter Orr and Alexander Orr (1845-1848), who later founded the firm P. Orr & Sons. This cup is particularly early, as it dates before 1832\. It appears to be the largest and heaviest example of early Indian Colonial silver that ever came up for sale, the only comparable piece in terms of quality and eclectic taste (with a successful coexistence of western and eastern elements) is the [soup tureen by P. Orr & Sons](http://collections.vam.ac.uk/item/O114949/centrepiece-p-orr-sons/), made in 1855, aquired by the Indian Museum the same year and now in the Victoria & Albert Museum (London). 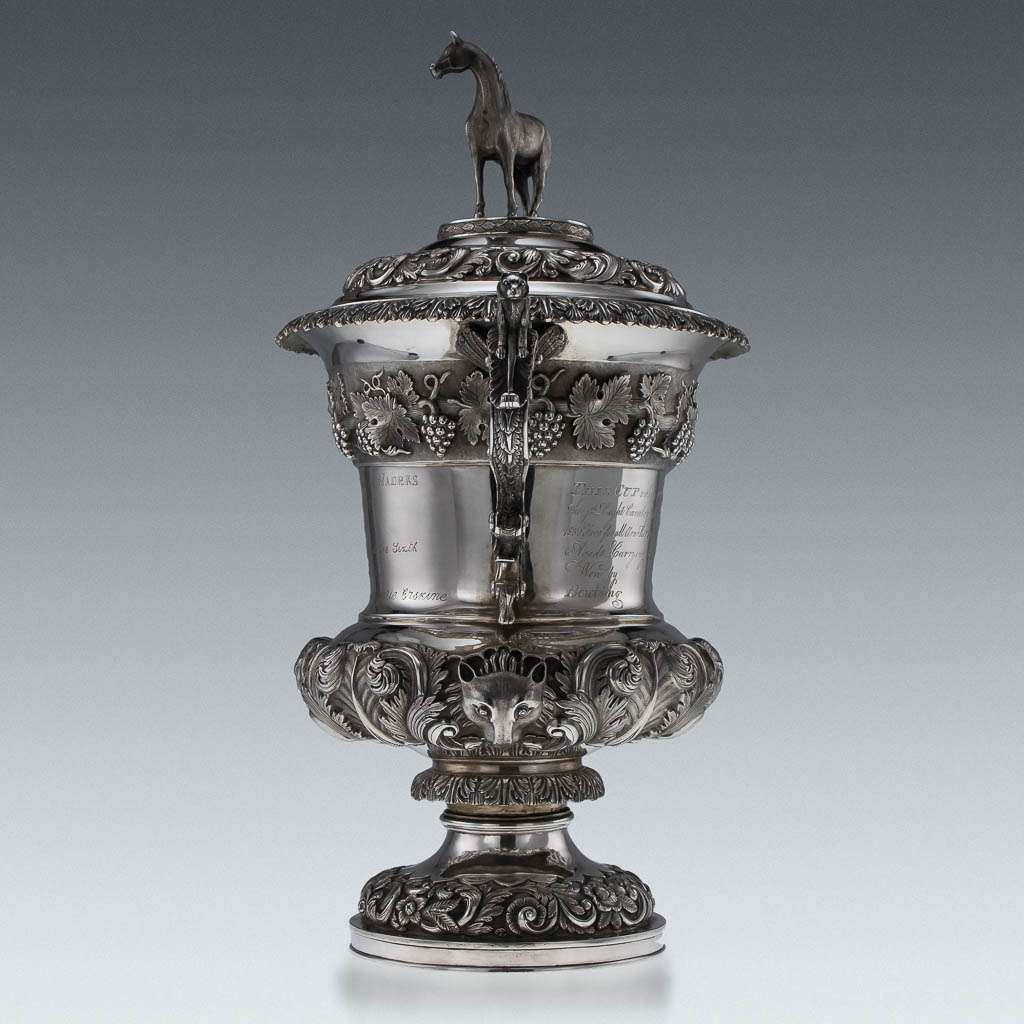 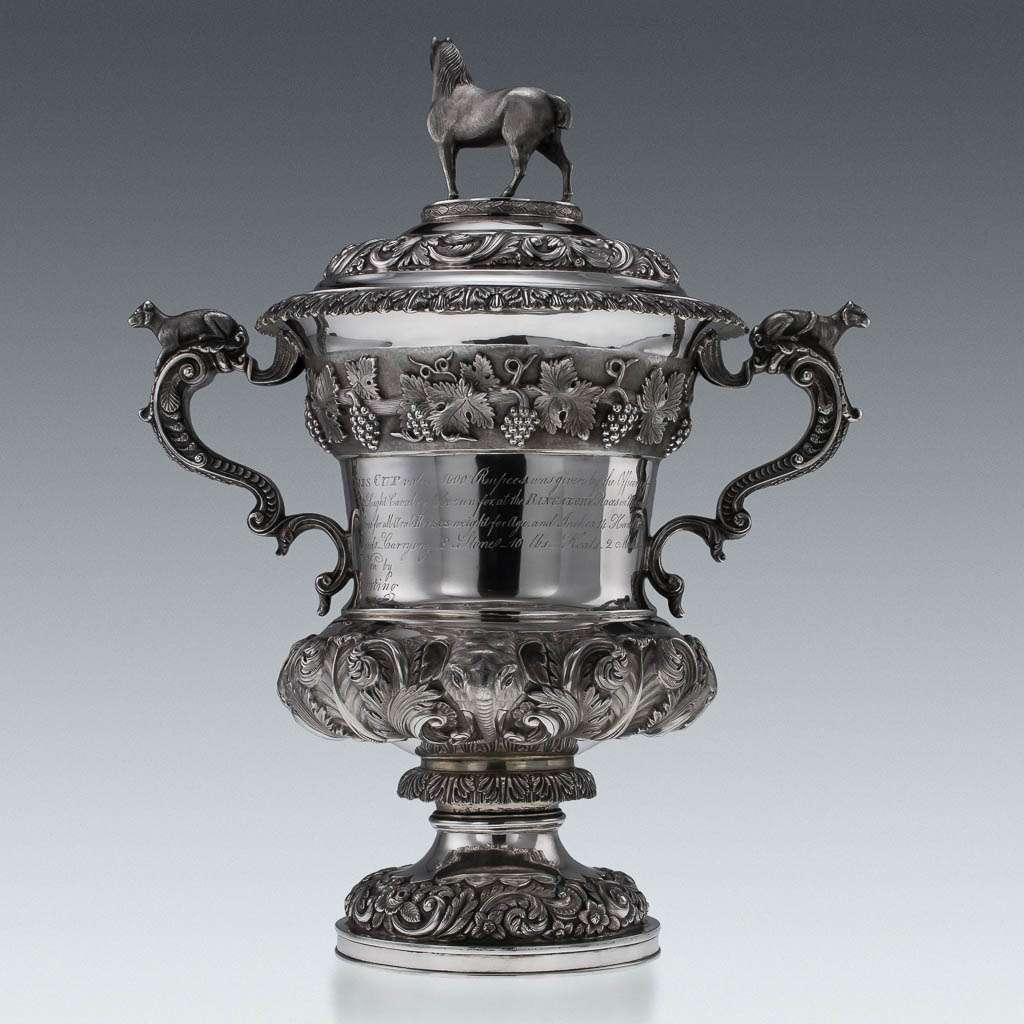 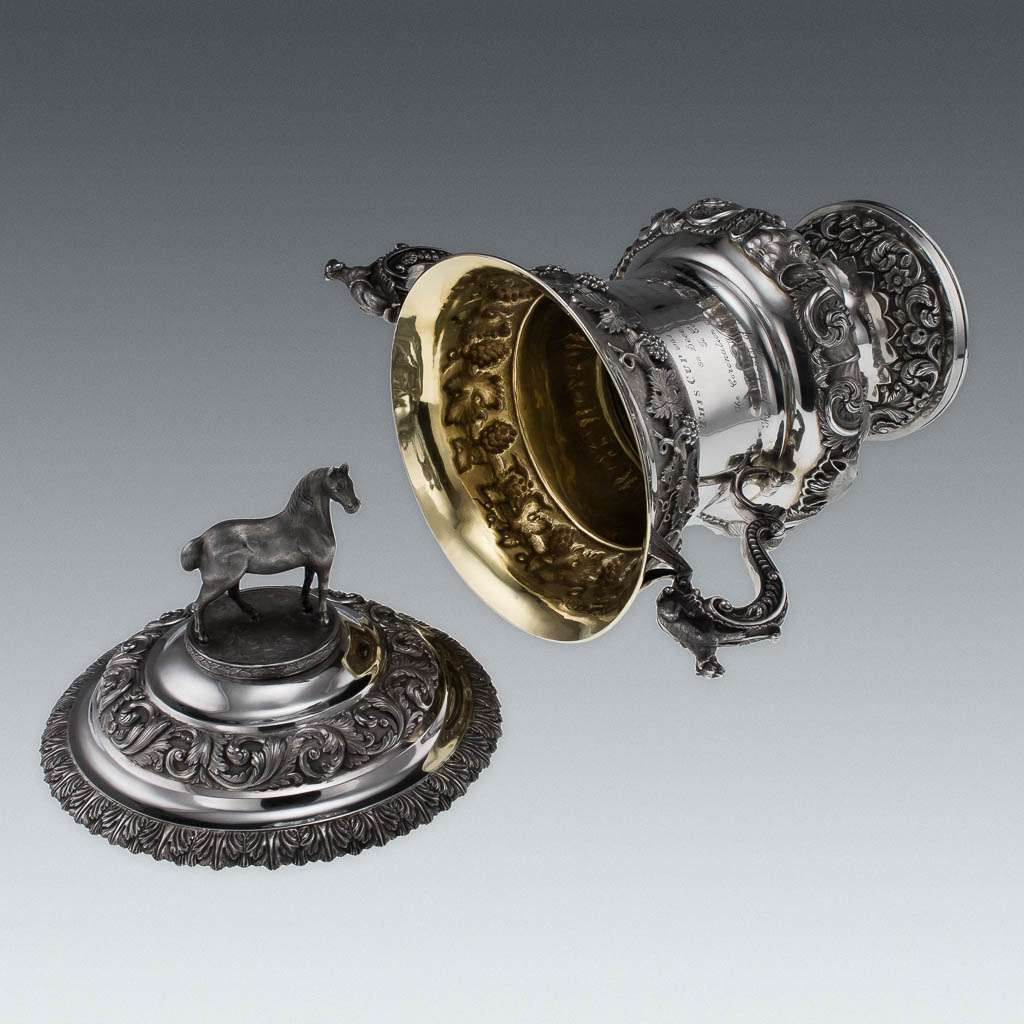 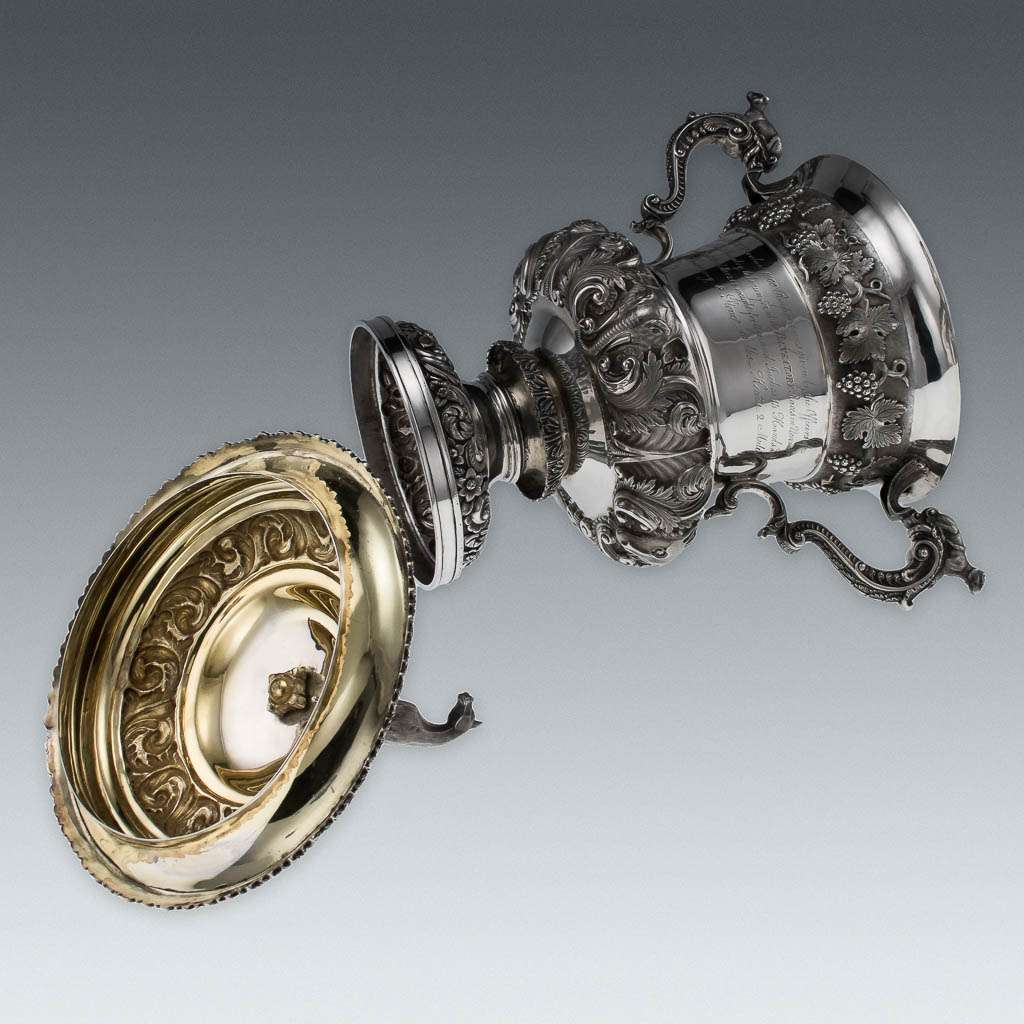 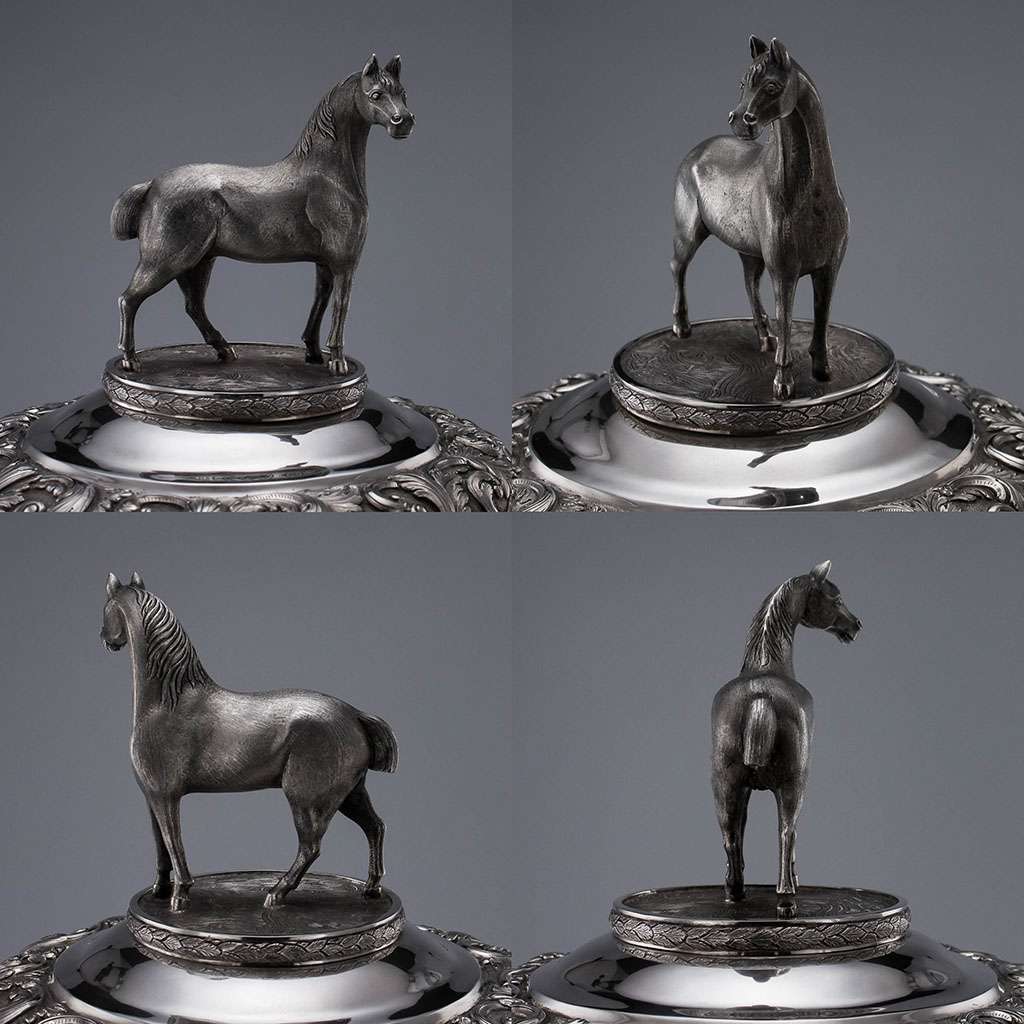 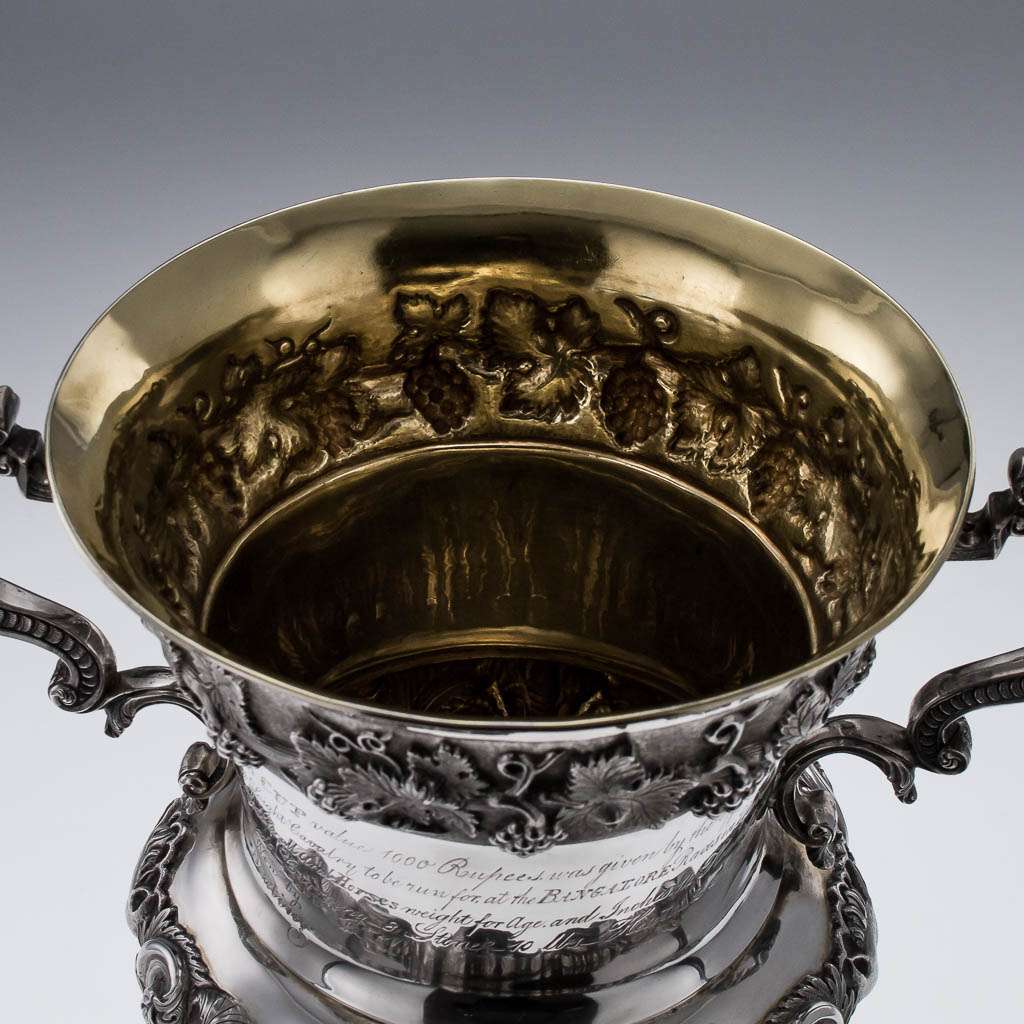 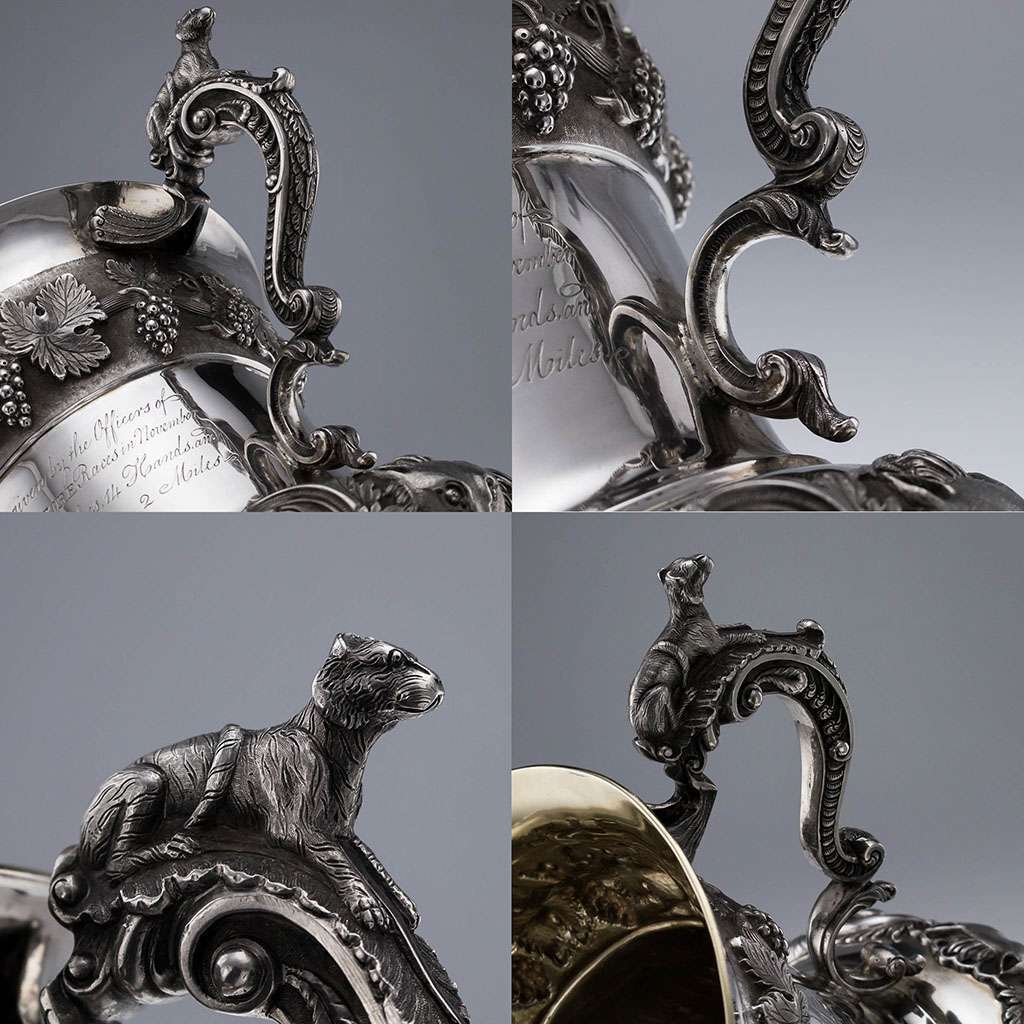 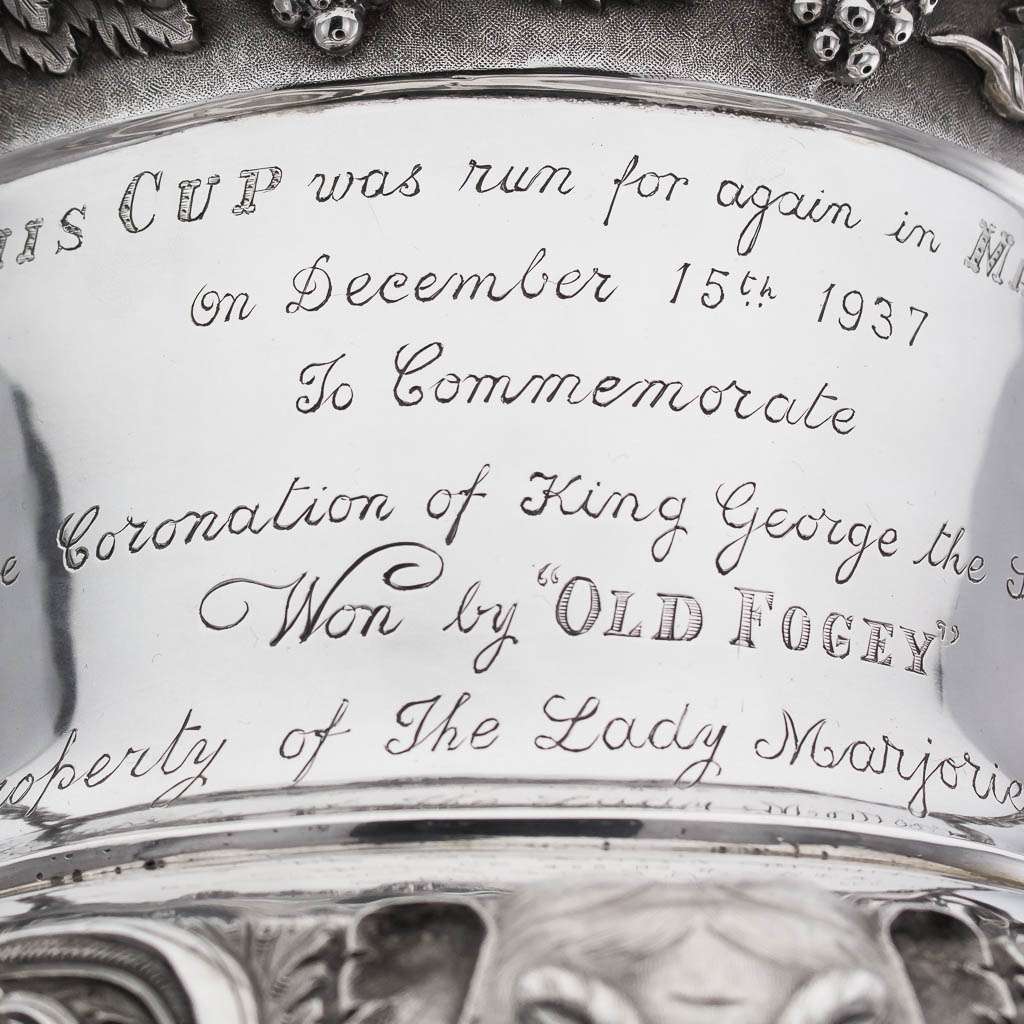 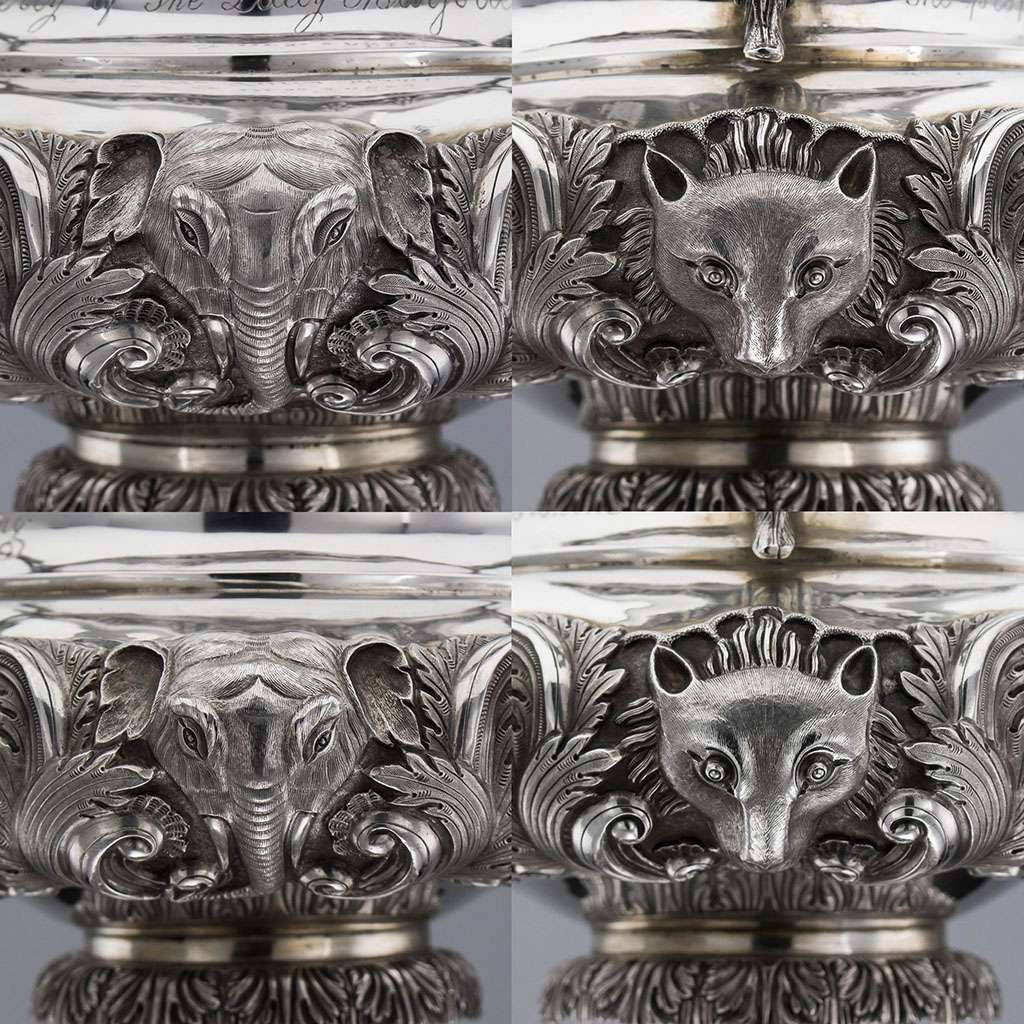 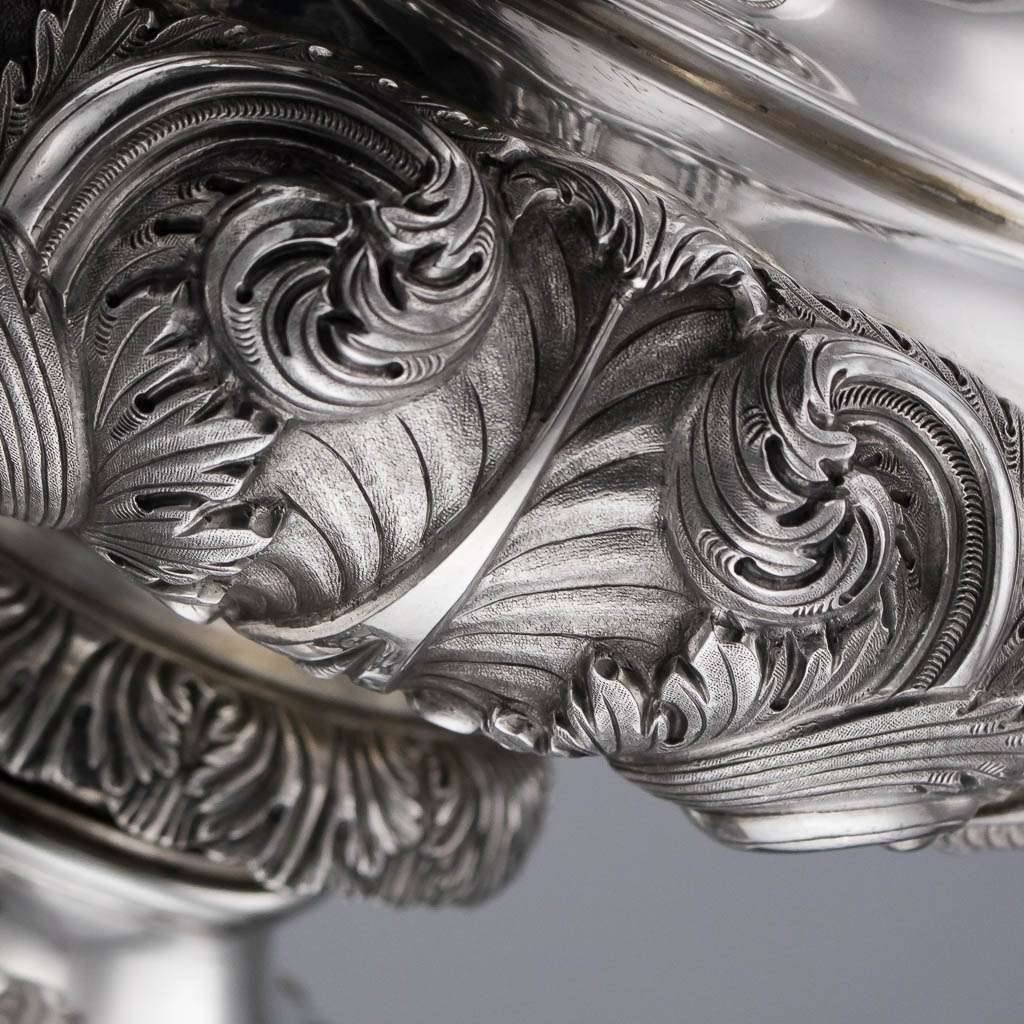 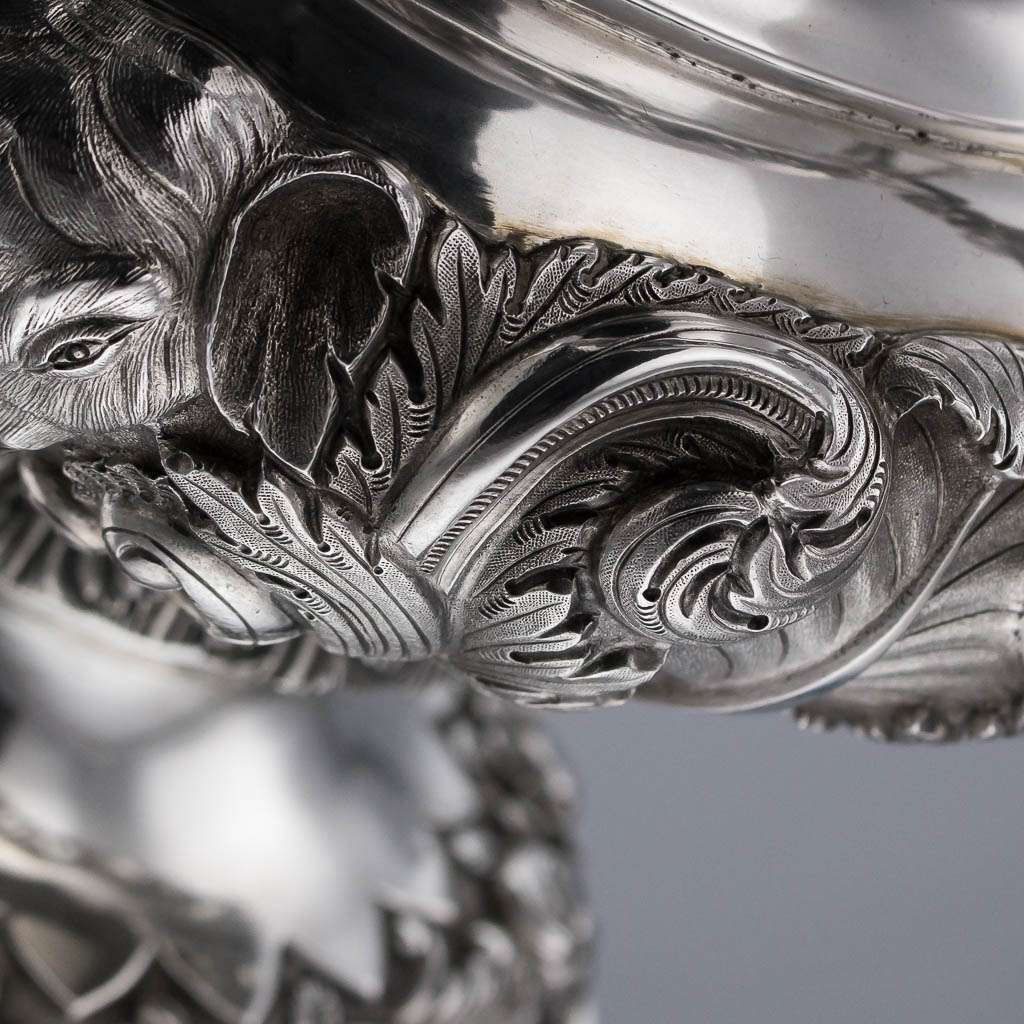 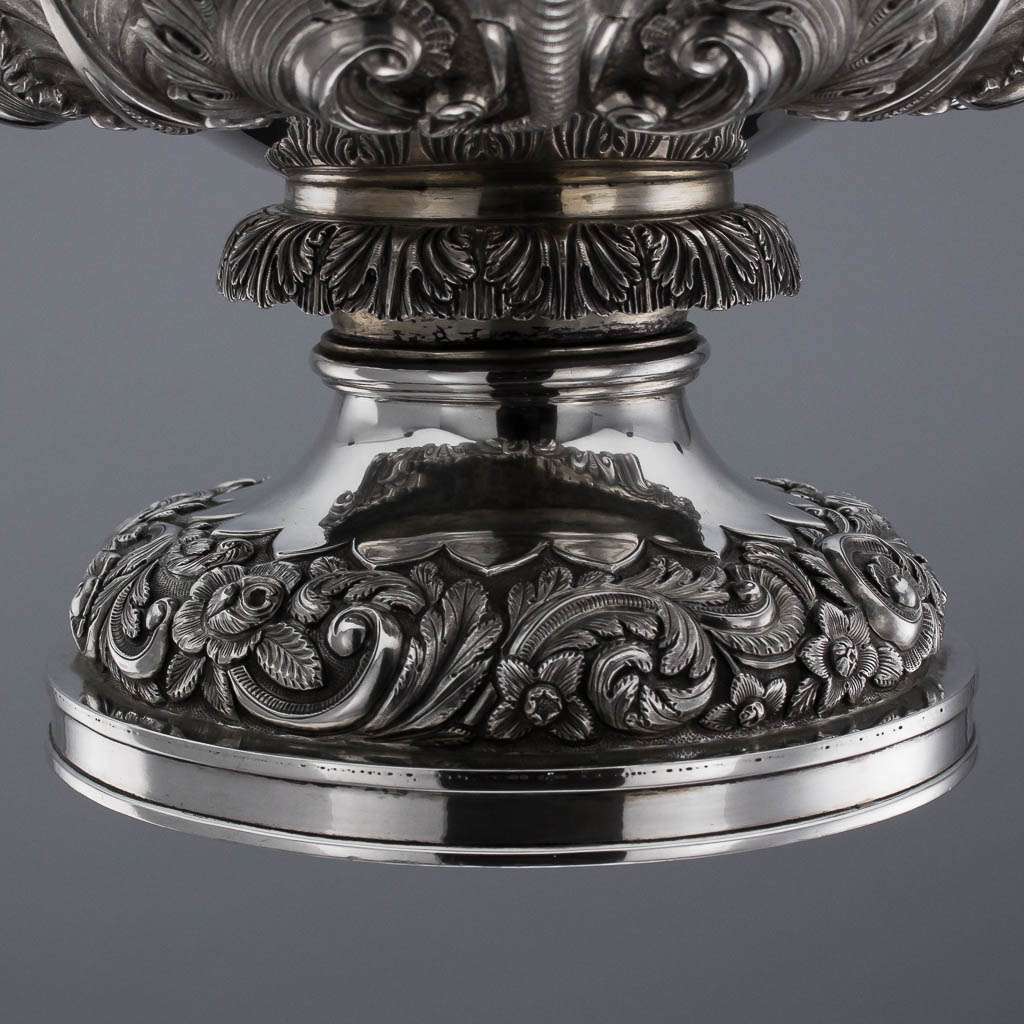 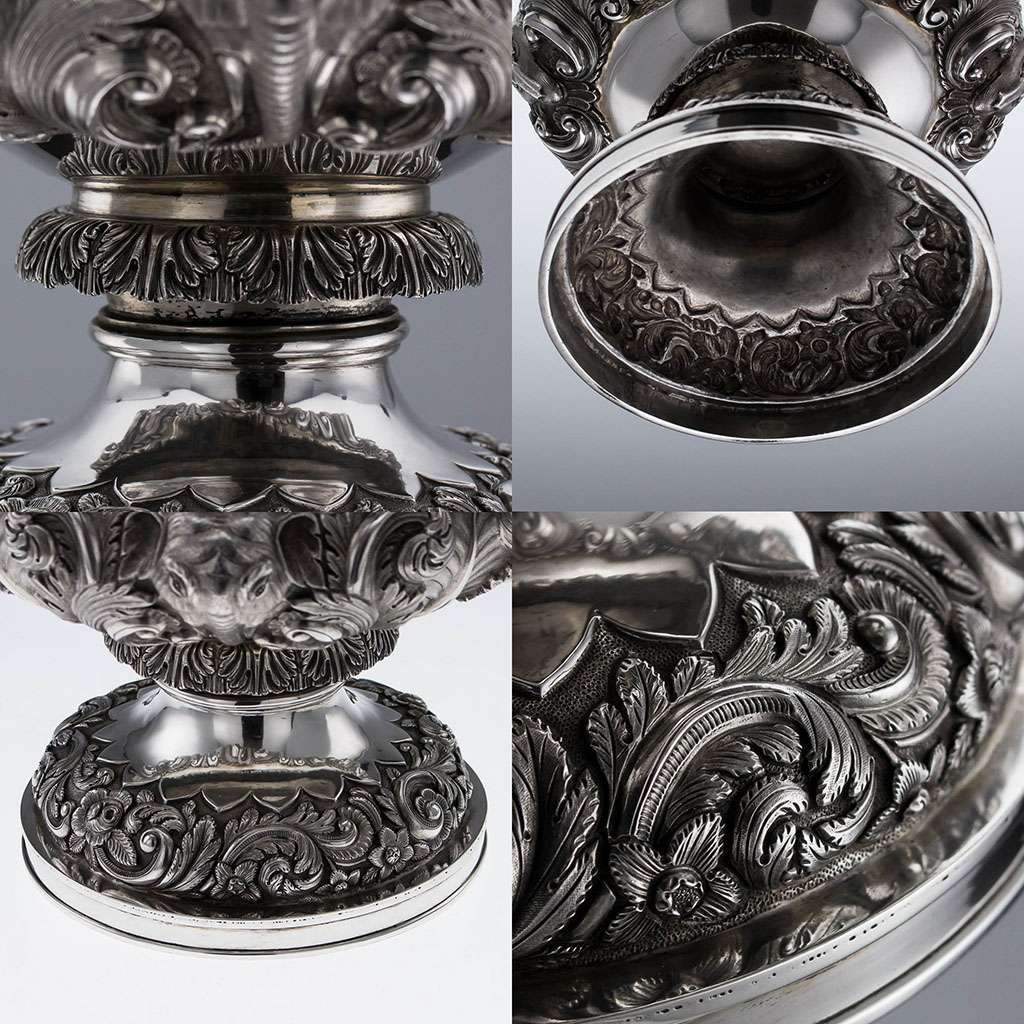 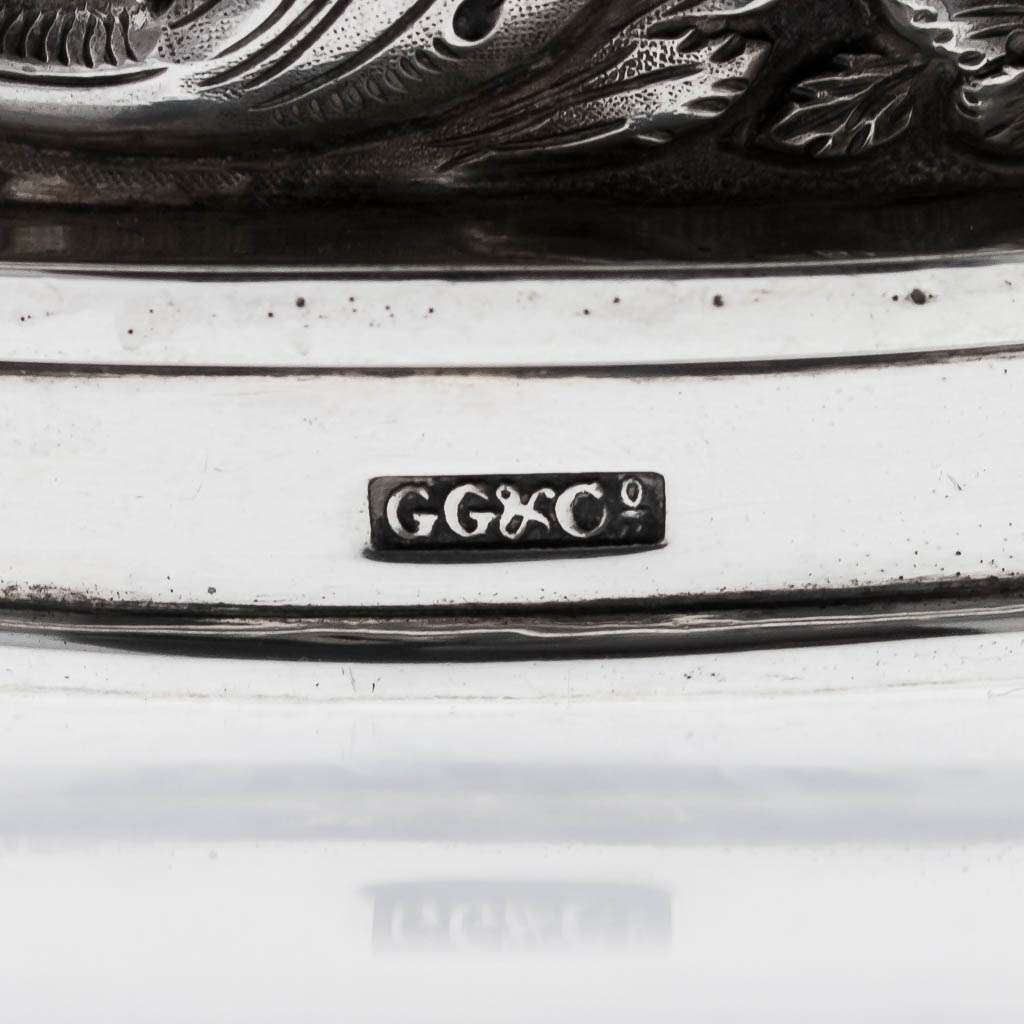