World’s Most Expensive Vodka is Safe in Hong Kong

World’s Most Expensive Vodka is Safe in Hong Kong

Imagine the shock when Michel Morren learned from a news alert that the “world’s most expensive vodka” had been stolen. Creator and owner of ‘The Eye of the Dragon’ valued at the minimum, a staggering USD $5.5 million, Michel Morren immediately accessed his vault in Hong Kong where the extravagant bottle of vodka is being stored. He found it to be safe and unharmed.

Over the weekend, several major media outlets reported the theft of the so called “world’s most expensive vodka” in Denmark when a bottle of Russo-Baltique valued at USD $1.3 million was stolen from a Copenhagen bar, where it was openly being displayed. Chairman and Founder of Royal Dragon Vodka, Michel Morren said, “There is no doubt we own the most valuable vodka in the world, the value of Russo-Baltque’s bottle does not even come close.” 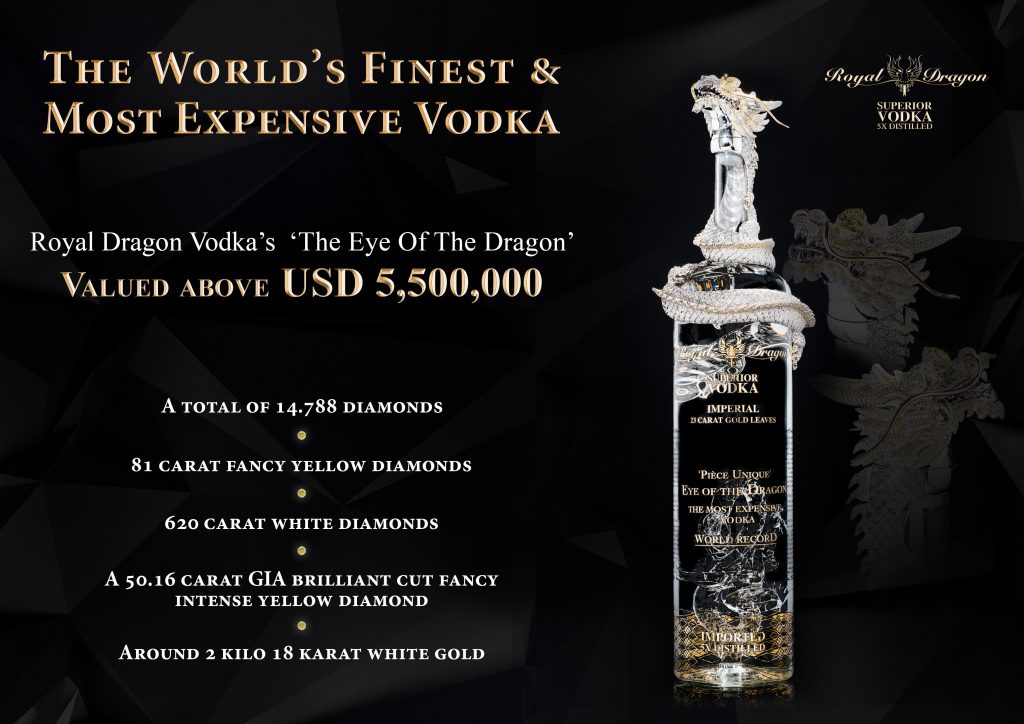 The Eye of the Dragon

Morren and his team, in exclusive partnership with Scarselli Diamonds New York, a global leader and established authority of trendsetting fancy coloured and rare diamonds, took over 8 months to design and produce the one-of-a-kind bottle of exquisite art. Appropriately named ‘The Eye of the Dragon’, the 6-litre hand-blown bottle is filled with ultra-premium Royal Dragon ‘Imperial’ Vodka, encased in 2 kilograms of solid 18-carat gold while featuring a 50 carat (GIA certified) round intense yellow diamond. The value of this extremely rare yellow diamond alone is already more than USD $4.6 million. Along with 15,000 additional diamonds encrusted on the bottle, the masterpiece boasts a grand total of 620 carats of real, dazzling diamonds. Dutchman Morren stated that he unmistakably has in his possession the “most expensive vodka bottle” in the world, and wants to give the world an opportunity to see it for themselves. To kick off the upcoming Lunar New Year celebrations next month, Morren is planning an official reveal of this spectacular bottle on 16 February 2018 live-streamed online from a secret luxury location.

Go to Luxify to buy their award winning collection! https://www.luxify.com/dealer/1710/royal-dragon-vodka